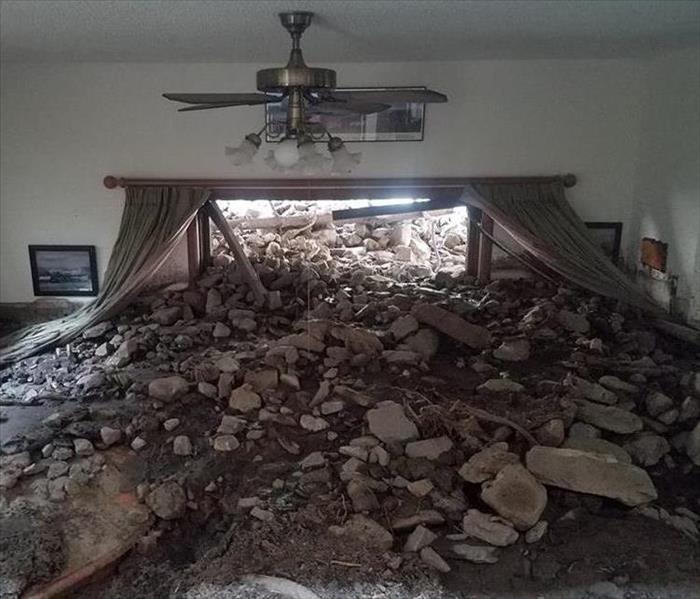 The ground level of this unit is buried in several feet of mud & debris.

The 416 Fire north of Durango is now 100% contained but expected to continue burning until winter snows extinguish any fire and coals.  The fire scars combined with the intense monsoon rains have created the recent mudslides in the Animas valley near Hermosa.  The paths of the mudslides are unpredictable and may occur in other parts of the fire zone such as the Falls Creek subdivision depending on local rainfall.

After several units of The Pines condominium complex suffered catastrophic mudslide damage, SERVPRO of Archuleta, La Plata, Montezuma & San Juan Counties was called to survey the damage, create detailed estimates to restore the properties and begin mucking out the mud and debris that had piled up several feet deep in the lower levels of the properties.

Despite US Highway 550, the only corridor to access the affected area, being temporarily closed due to the mudslides, our crews of highly trained restoration technicians arrived later the same day to begin work after receiving authorization from property owners.

One unit was buried so deep in the wet, silty mud that our Production Manager, Zac Fosco, needed to wear snowshoes to keep from sinking in the quicksand-like muck while surveying the damage to the unit.  We worked quickly with the owners to remove specific items that held sentimental value before stabilizing the damage and beginning the cleanup process.

SERVPRO of Archuleta, Montezuma, La Plata & San Juan Counties is here to help you 24/7/365 with any storm damage and restoration issue.